This is a rare and incredibly unique piece of Judaica, dating to the 19th century, used for ceremonial purposes and holy rituals. At first look, this piece appears to be a large chalice with fine engravings, attached oval emerald, real diamonds, pearls, and rubies. The cup itself may be crafted from silver but is most likely crafted from a copper and brass mixture.

The engravings found on the whole piece depict important imagery of the Torah: the 10 Commandments, Crown and Castle with the Flowing Waterfall, Grapevines, and Leaves to represent Wine, Hebrew text, a Menorah with the two Lion figures, and some Portuguese text.
Some of the text found on the bottom of the Chalice translated from Hebrew reads: "Bless and light candles for the Sabbath", "Light the blessings for Hanukkah", and "Blessing on Wine." The text found on the side of the Chalice translated from Portuguese reads: “God wants us”
The cup can be opened in 5 different ways: By the lid, the cup within the chalice holding the scroll, the scroll itself, the candle holder compartment to use for the lighting of the candles before the Sabbath or lighting the candles for the spices at the end of the spices or the lighting of the menorah for Hanukkah, and by the top of the lid for the spices valve, which was used for prayer for the ending prayer for the sabbath to alleviate sadness.
The scroll inside the Chalice is called “The Book of Esther”, which is a ten-paragraph text for the holiday of Purim where the Jews were threatened to be wiped out by the Maccabees. This incredibly fine piece is at least 70 years old but has the look for an item that is several hundred years old. 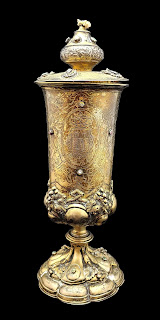 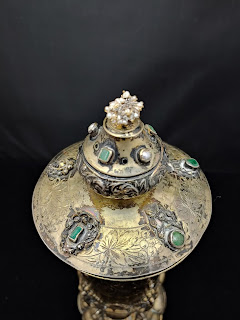 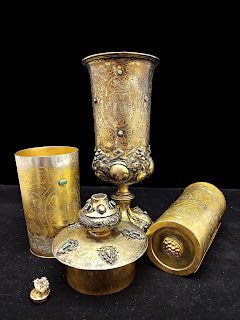 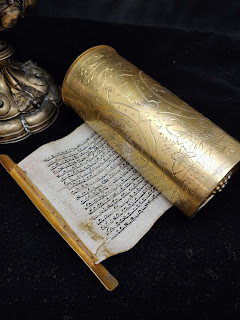 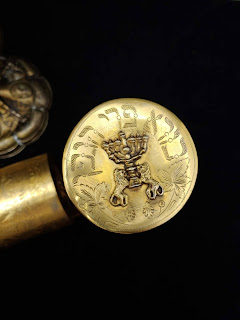