This is Lee the Appraiser from APR57 Gallery for another Amazing Appraising blog post.

Do you know who was the only one to hit 3 home runs in a World Series baseball game?

Around 20 years ago, in the year 2000, a gentleman comes into the store, he introduces himself, and we talk for a little while. Long story short, he tells us that he is Thurman Munson's ex-agent. Now, Thurman Munson was considered to be one of the greatest modern-day baseball players of all time. He was one of the toughest baseball players. History has it, he came out of high school and was recruited as a football player. Most people think of baseball as a skill set sport, but he was a rough as they come, and typically, most people that slid onto the base, would be running into a brick wall, and he was very happy to send you to the hospital if he could. Everyone respected his skill, ability, and strength, and he was considered to be one of the most beloved Yankees.

Munson was the first Yankee Capitan that was voted on since Lou Gehrig. Munson was well-respected and admired for his talent by the Yankees. George Steinbrenner was the loud, audacious owner of the Yankees. The agent told me that when Munson joined the team and signed the contract to join the Yankees, Steinbrenner made a verbal promise to Munson, that at all times that he was on the team, he would be the highest paying player on the team. Everything sounds good, and Munson took him to a couple World Series games. Then in 1977, Steinbrenner wanted to put more firepower on the team, they needed a good power hitter. Reggie Jackson becomes a free-agent from the Oakland Athletics, one of the first big free-agent signings and free-agent availability on the market. Jackson was known for his tremendous power, incredible speed, and charismatic personality, somebody Steinbrenner thought would be great in New York to help the Yankees to become a dynasty.

So, Reggie Jackson became a free-agent, and Steinbrenner signed Jackson to a 5-year contract at around $2 Million. Thurman Munson, and obviously everybody knew about this, that Jackson was signed to a contract that was considerably over what Munson was being paid. So Munson talks to Steinbrenner, and he says, "come down to my office," and the story I heard directly from the source, is that George Steinbrenner told Munson, "I'm a man of my word," and hands him a suitcase with over $500,000 in cash to basically make up for the fact that Jackson now is the highest-paid Yankee.

When Jackson came on the Yankees, a year or two so later, when they won the World Series, which got a lot of publicity and was quoted saying, "I am the straw that stirs the drink." Meaning he is the main guy on the Yankees that pulls them over the hump and carried them on his back. So he made that remark, and supposedly, as the ex-agent told me, Thuman Munson did not like Reggie Jackson at all, even before making that comment. After the remark, my understanding is, Munson despised Jackson, and he despised Jackson so much that he did not want to even take the same plane as him. Thurman Munson took up flying so he did not have to fly on the team plane with Reggie Jackson. Of course, as everyone knows, in the Summer of 1979, Thurman Munson, while practicing and taking a test run on his plane, crashed, broke his neck, and caused him to lose his life in this unfortunate accident.

To me, it sounds like Munson was going well-overboard to learn how to fly just so he did not have to fly on the same plane as Jackson. I will have to say, Reggie Jackson, I was a great fan of his and he played with tremendous power, and in Jackson's defense, he said he never made such a statement. He denied it then, and he denies it now that he never made the remark, and the reporter intentionally misreported him.

- If you enjoy learning and listening to stories about appraising, collectibles, all things sports, and luxury watches, we are now on the radio at the station, WOR 710 AM, every Sunday evening between 8pm-9pm. Be sure to tune in! 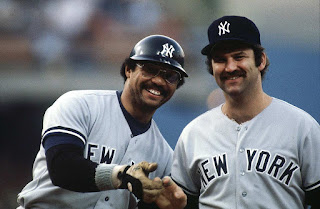