This is an original, typed letter, written and signed by the ex-president of the United States, Franklin D. Roosevelt on January 25,1937. The letter is written in response to famous New York Times sports journalist, James P. Dawson.

James P. Dawson was a sportswriter and columnist for the New York Times. He began what would eventually become a 44-year career as a copy boy in 1908, eventually becoming the Times Boxing Editor in 1915. From 1919 on, he covered every major boxing event held in New York City. He was a founding member of the New York Boxing Writers Association in 1936, where he served as its first Vice-President. He was also a member of the New York chapter of the Baseball Writers Association, serving as President in 1936 and 1937. Dawson, who covered all three New York baseball teams, died from a heart attack while covering the Yankees in St. Petersburg, Florida, during spring training in 1953. The annual James P. Dawson award is presented annually to the top rookie in the Yankees' training camp.

Appraisal value: $300,000.00Our price: $169,000.00
This item is in Good Condition and will be shipped exactly as photographed with the frame w/ the original White House letterhead envelope.
It also comes with:
FREE $300,000.00 Certified Insurance Appraisal
FREE Certificate of Authenticity
Feel free to contact us at 917-439-9610 with any questions you may have in regards to this piece or any item you may be interested in.
This piece can be viewed at our new gallery, APR57. 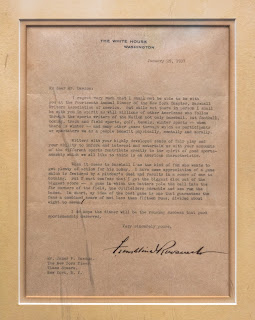 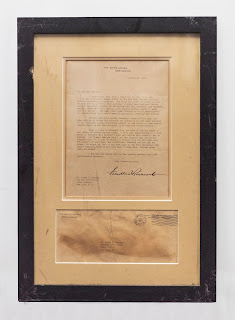 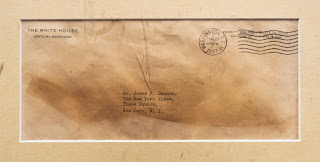