MUHAMMAD ALI "Foreman vs Ali Zaire" Right Hand Wrap Worn During 1974 Fight
One unique right-hand wrap used and signed by George Foreman in his fight with Muhammad Ali, famously known as the "Rumble in the Jungle". This fight was held on October 30, 1974, in Kinshasa, Zaire (now known as the Democratic Republic of the Congo). In this fight, 32-year-old Muhammad Ali became the heavyweight champion of the world for the second time when he knocked out 25-year-old champ George Foreman in the 8th round of the 'Rumble in the Jungle.' The fight is famous for Ali's introduction of the 'rope-a-dope' tactic. It has been called 'the greatest sporting event of the 20th century', and was watched by a record estimate television audience of 1 billion viewers worldwide, becoming the world's most-watched live television broadcast at that time.
The wrap gloves are an eggshell beige color and signed by George Forman in red ink right across the knuckles.  This piece of boxing history is perfectly preserved, and it shows light blood stains on the knuckle area. These gloves were given by George to the owner of the gym that he always trained at. George gave the wrap gloves as a token of appreciation because the gym owner never charged George to use the gym, but that was understandable because just having George use the facility helped the gym bring in even more clients. By having a heavyweight champion train at your gym, it brings a lot of publicity, foot traffic, and clients that come in to train and watch.
George Foreman is one of the most well-known and venerable boxers worldwide. He won Olympic gold in 1968 and powered through boxing's heavyweight division to become world champion in 1973. He returned to the ring after a 10-year hiatus and amazingly became world champion a second time at age 45, before embarking on a successful post-boxing career as a pitchman and entrepreneur.
Muhammad Ali  was an American former heavyweight champion boxer and one of the greatest athletes and social activists of the 20th century. An Olympic gold medalist and the first fighter to capture the heavyweight title three times, Ali won 56 times in his 21-year professional career. Ali has also left a grand legacy in social activism and inspires many to this day.
Another memorabilia with a connection to the legendary Ali, Muhammad's Ali's "Rumble in the Jungle" WBC title belt was sold for $6.18 million to the Indianapolis Colts owner at a recent auction in July of 2022.
Appraisal Value: $500,000.00Our price: $245,000.00

It also comes with:
FREE $500,000.00 Certified Insurance Appraisal, Lifetime Certificate of Authenticity, and 2-year International Guarantee!
Feel free to contact us at 917-439-9610 with any questions you may have in regards to this piece or any item you may be interested in.
This piece can be viewed at our new gallery, APR57.
- If you enjoy learning and listening to stories about appraising, collectibles, all things sports, and luxury watches, we are now on the radio at the station, WOR 710 AM, every Sunday evening between 8pm-9pm. Be sure to tune in!
If you have anything you would like to sell or have appraised, please call or contact us. We are the only company to provide free appraisal services. We would be happy to tell you more about the piece.
APR57
200 WEST 57TH ST.
NEW YORK, NY 10019
📧 E-MAIL US!  Lee@apr57.com
📞 CALL US!  917-439-9610 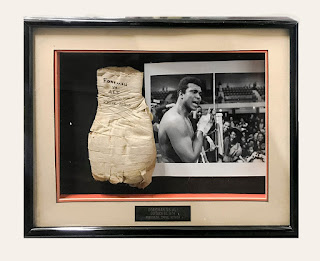