Jean-Michel Basquiat was a prominent contemporary artist of our decade. This piece, Skeleton Head, by Basquiat, was featured in an early collection known as Neptune's Place. Neptune refers to his  drug dealer, Lonnie Lichtenberg, who was also a personal friend, whom Basquiat nicknamed King of the  "C" (C for cocaine) or "Neptune.” Lichtenberg was also a fan of Basquiat’s works and an avid collector.  Many times, Basquiat traded his works with Litchenberg for drugs. That is how Litchenberg came to collect many of Basquiat's early pieces. Skeleton Head was part of his sketches and features a red and blue figure outlined in black. The work is reminiscent of his later works, which follow more or less the same silhouette, facial features, and hairstyles. The drawing has a heavy graffiti-centric theme and style. 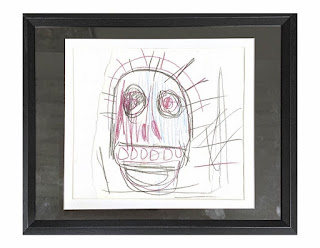